When I know better, I do better. 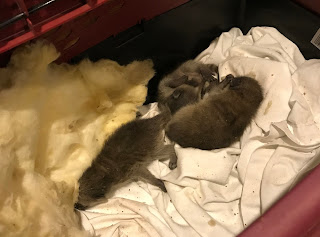 We've had raccoons in our attic before, but because their entry point didn't cause immediate issues, we were patient and managed to successfully encourage them out. This time was different.

The night before we left for Orlando, we heard and saw a raccoon causing some trouble on our roof. We chased her off, but the next morning I saw some roof shingles on our deck and investigated. I saw that she had dug a hole directly into our roof! We did our typical steps to try and get her out, but we had to be on a plane and did our best to cover the hole in a way that didn't trap her in, but would protect the soffit from too much rain damage.

When we returned from vacation, we figured out that not only had the mama not left, but she also had babies. We did a lot of the same things to try and get her to move her nest that worked last time, but we had to get our roof fixed, so we became impatient.

We called a company that helps in these situations, and trusted them to take care of it. They covered all of the possible entry points and set a trap at the main point and covered it with a tarp. Yesterday morning, I saw some shingles on the deck again, so I went out to investigate the hole. The tarp had blown off of the trap, and the mama raccoon was caught, and she was dead.

Suddenly it hit me. This was their plan all along. We had been so naive. We didn't ask enough questions, and now we had a litter of orphaned baby raccoons in our attic. Nate tried to contact the company, but they did not call him back. It became clear that the intention was to let the babies starve to death.

This was heartbreaking. I understand that a lot of people see raccoons as a nuisance and that's okay. Nate and I live near the woods and want to coexist with the animals who live around us. We had no intention of destroying this little family, but that's exactly what happened.

After some research we found that the Wildlife Rescue Center helps in situations like this. I called them and reluctantly told the story, and asked for their help. They connected me with a man who dropped everything to come out to the house and get these babies out of the attic, and into the hands of people who will care for them. My only wish is that I had thought to call him first.

My goal now is to tell everyone I know that there are humane ways to remove wildlife from our homes. It is just as easy, and there are people who dedicate thier lives to helping us live side by side with the animals we see as a nuisance. Lesson definitely learned.