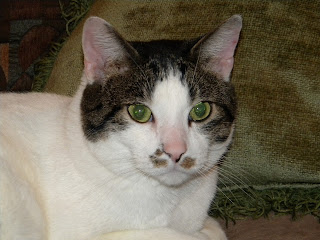 I adopted Bill in August of 2003 from a coworker. I later learned that he was likely taken from his mother much too soon. I actually thought he was a girl and named him Lilly! It didn’t take long to realize my mistake.

The movie Kill Bill came out not long after the adoption, and it became the joke because he was such an asshole. Seriously. I thought maybe it was just that he was being compared to the best cat on the face of the earth (Cat V, RIP), but as time went on and I got to know him more, I think he was just a jerk.

He had what we have now labeled as Irritable Bowel Disease (IBD). So perhaps he was just sick and not an asshole. It is still unknown for sure. He often had bowels outside of the litter box. I usually could figure out what was wrong and fix it – new litter, a new box with a clean scent, etc. I took him to the vet every few years starting in 2006 trying to figure out what was going on. They typically treated it as behavioral and made me feel as though I wasn’t doing enough for him. I had one vet tell me to put the litter box(es) in the main area of the living space. When I explained I had a toddler and that wouldn’t work, she acted as though I wasn’t doing enough to arrange my life around the cat. She kind of sucked a little bit.

Around 2014 when I finally realized this could be health related, I searched online and found some information about food and food allergies in cats. I tried a different food and for the first time in as long as I could remember, he had solid BMs. It was like a miracle.

It didn’t last long though. Sometime in 2015 I went back to the vet and saw the male doctor who treats my dog. He looked at the long history of bowel trouble and said some of the most validating words I have ever heard “wow, you have been dealing with this longer than most people would have”. This was when I began to see him as needing more medical care, and less like I was doing something wrong or not enough to discourage the behavior.

That doctor put him on some special low allergen (i.e. expensive!) food, and a steroid, which helped at first. When things were good, they were good. When they weren’t, Bill had to stay in the basement where his 2 litter boxes and food were. I would periodically let him spend time upstairs, and eventually he would pee or poop somewhere and would have to go back downstairs.

In December of this past year, when that last doctor retired, I worked with another doctor in the same office and we decided to go a route we hadn’t gone before – treating this as anxiety. He gave me 2 medicines to try. When we got home from the appointment, Bill was like a new cat. He had solid(ish) BMs, he was friendly, and he stayed upstairs with us and was like having our healthier Bill back. I didn’t try the medication.

That lasted about 3-4 weeks, then things turned south again. This was sometime in January. I tried the meds but he wouldn’t take one at all, and the other I had to hold him down to give, and he threw it up anyway. Over the new few months I would try less and less to reintroduce him to our living space.

About 2 weeks ago, I brought him upstairs and blocked off the majority of the house so he couldn’t access it. It was a great day full of snuggles and hanging out with Bill. I tried to let him stay upstairs overnight, but as I started to fall asleep I heard a loud and explosive poo at the end of our bed. That’s when I realized this was not at all behavioral. This was complete incontinence of bowel, and out of his control.

So I called and made the appointment with the vet for 5/7, prepared to have the conversation about the next steps for being unable to continue to care for him.

When I went into the appointment and described the symptoms, as well as what I had tried, I said that words I was so afraid to say when it came to Bill “I don’t think I can take care of him anymore.”

The vet was so supportive. He validated everything I have done and said no one could have taken care of him as long as I did. I’m not really sure what I expected when I left the house on Saturday. Maybe that they would suggest a shelter for cats like him, or maybe want to observe him for a few days. But none of that happened. They just brought the form for me to sign and started the process. They asked if I intended to stay and where I wanted to do it. I did want to stay, and I chose the “quiet room” which is where I held Cat when it was his time. I wanted him to be in the same place Cat was, for some reason.

I had some time with him before they did anything, so I just snuggled him. I noticed that his ears weren't red. Whenever he was stressed, his typically pinkish white ears and nose would become bright red. They were red when we got to the office, but when we were in the quiet room they were not.

I cried a lot. I held his little body as they injected a muscle relaxer and he became limp, but I could see his little chest rising and falling. I told him I loved him, and that I hoped he felt loved and that I was sorry. The doc came back in and gave him the medicine that made his heart stop. I found myself smiling when he was taking his last breath. I was so happy to be with him during this time in his life, which I felt was as beautiful as any other part of life. The doc said he was gone and left me to stay as long as I liked.

Once he was gone I didn’t feel a need to stay. I knew it wasn’t him anymore. So I covered him up with the towel he was laying on, kissed him and walked out.

I told a friend today that I didn’t know why I was taking it so hard. He was an asshole after all, and at times I didn’t even really like him that much. Her response was that sometimes assholes need the most love. I definitely think that’s true.

This is also the first time in at least 16 years that I have not had a cat. Before then my parents always had cats. I didn’t buy cat litter at the store yesterday. I didn’t have to feed him this morning or make sure he was ok in the basement. It’s a huge difference to suddenly not have to do something I’ve done daily for most of my life.

BBZ wants another cat. I think I need a break for a while. I made N promise to stop me if I ever suggested getting another cat. It’s hard to risk it without knowing what kind of cat we’d get. Although the boys have a pretty limited view of what it’s like to have a cat since Bill is all they knew. Either way, it will be a while.

I'm slowly getting adjusted to a cat free house. I wonder if Delilah even notices he is gone. She has her own health issues going on, but I wonder if she realizes. Animals do seem to have a sense about such things.

RIP Bill, I will miss you and your sweet little face.

I hope these two are chilling together once again. 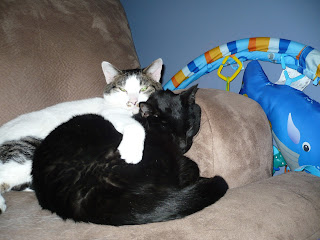