We've been having so much fun around here!  We are definitely settling in.  I have also been taking lots of videos since I fell behind for a while.  Here is our little man with his new Koi Pond!

N recently became a young member of the local Botanical Garden.  We weren't members before and I had only been to the garden a few times, but since he's become a member we have been there 3 times!  We went last Friday with some friends for a member's picnic.  We got to explore the children's garden and had a blast!  I have to explain the video below...BBZ and I slid down the slide once and then he saw a little girl slide down face first.  We rushed to the top of the slide to go again, I swooped him up and prepared to slide again, when a serious fit ensued.  Basically, he wanted to slide down face first and I thought he was too little and would summer-sault down for sure.  N hollared to be that he would fine and said for me to let him go.  So I did, and this is what it looked like...

So as you can see, he was fine.  I am trying to be a bit more relaxed about things with my little man.  I have accepted the fact that he is a boy and it is more than likely that we will find ourselves in the hospital for stitches or broken bones once or twice throughout his childhood.  He was fine...and had a blast!

N and I decided that the play room needed a little something extra.  We painted a chalkboard!  It was super fun to paint and N finished the border tonight.  Check him out!

One Year Ago Today...

...I returned to a hospital I had been sent home from 15 hours before after being erroneously told that my baby was "sick, but not terminally ill".
...I pumped every 3-4 hours so I wouldn't lose my milk.
...I held my baby down so doctors could perform a painful 20-minute long procedure in an attempt to avoid surgery.  It didn't work.
...I held his limp and exhausted body on mine for an hour while they prepared for surgery.
...I rejoiced in a successful surgery.
...I watched him sleep and promised to never take another moment for granted.
...I knew my life with my son would never be the same.

...I woke up at 4 am with him and again at 6:30am.
...I held him down to change his diaper, an apparently traumatic event the 8 times it happens per day.
...I rushed a crying toddler to the car so we wouldn't be late for school/work.
...I juggled cinnamon bread and a plastic cell phone toy to try and entertain him on our longer drive to school.
...I gave him "one more hug" 3 times before leaving him at school.
...I took a deep breath as I walked down the hall to my car wishing I never had to be away from him.
...I tried to think about what it would be like to not have him in my life, and couldn't.
...my healthy baby boy has no memory of what happened one year ago today.
...I hope I never forget how it felt when he woke up one year ago tomorrow.  I stared into his eyes as he sucked his thumb and stroked my face.  When he is deep in his terrible twos, throwing fits about going for a walk or not, when he is a teenager and doesn't want me anywhere around, I hope to remember that feeling.
...I love you more than I even knew was possible.
Posted by Anna at 9:13 AM

Number 5
Filling all of the bird feeders with bird seed and watch them all afternoon while cardinals eat and squirrels try to reach it.

Number 4
Having Da-da bring home a turtle he found on the road to play with! 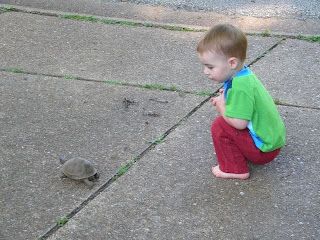 And trying to kiss it. 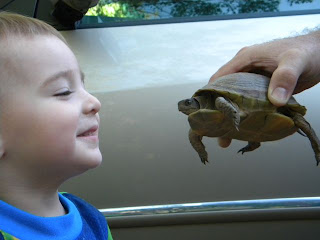 Number 3
Buying a cherry popsicle from the Ice Cream man for the very first time. 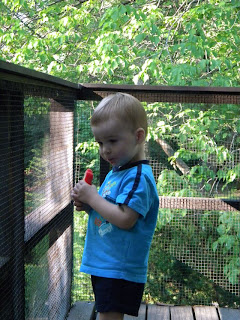 And eating it on the back porch with Da-da. 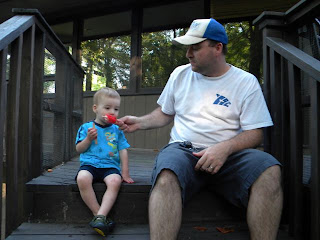 Number 2
Buying fishies at the pet store for the pond in the back yard, and learn to not throw rocks at them. 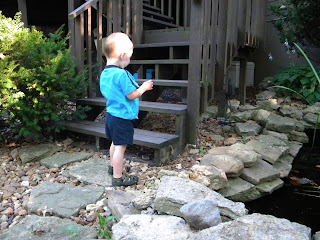 And the Number 1 thing that a little boy loves about his new house in the woods?
Exploring the big 'ol back yard with his Mama! 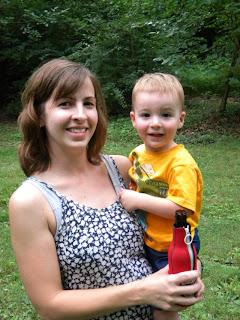 Ok, maybe that last one was actually MY Number 1 thing that I love about my new house in the woods, but whatever :)
Posted by Anna at 8:56 PM