I'm not sure who invented Craig's List.  Some guy named Craig, maybe?  Anyway, whoever invented this wonderful online classified ad site was a genius.  At least to this bargain shopper anyway.

I don't have the time, patience or energy to garage sale, unlike my in-laws who always stumble upon unbelievable finds during their garage sale-ing and auctioning (which often results in a new cooking something for me or a huge Tupperware full of Legos for $1 for BBZ!).

So there is nothing I love more than a great deal on a second hand something-or-other.  I read once long before I had BBZ of a woman who had a "green" baby shower where all of the gifts had to be second hand.  I didn't want to go that extreme as I think people should be able to purchase what they want for someone, but I did encourage people to pass their loved items onto me in lieu of a brand new gift.  I ended up with some gently used and very meaningful hand-me-downs for Mr. BBZ.

So, I have just about everything a mama of a boy needs since I have a little boy already, but that doesn't change the fact that there are some things I really wanted to buy.  I created a baby registry to help remember what I need to get and am slowly, but surely, knocking things off that list for mostly more than 50% less than what the baby store wants for them.

First off the list was the newborn to toddler rocker.  I had one for BBZ, but both cats on 2 different occasions made it their home and I didn't think I could wash it.  With a little patience and some creativity, I was able to remove the seat part and wash it up!  It's just like brand new!

Next was the swing.  I bought a used one on Craig's List when BBZ was brand new, but it was not a great swing.  It didn't work well at all, and as much as BBZ LOVED that swing, I didn't want to take any chances with another Craig's List purchase (while I love the site, I would recommend not purchasing anything electronic).  Our friends passed on their well loved swing that is patiently waiting in the playroom for LBZ to arrive.

Besides some prefold diapers and covers, that's about all I have bought for Mr. LBZ.  The best thing so far is my beautiful, brand new breast pump.  I bought a used one on, you guessed it...Craig's List :), for $60 when I was about this far along with BBZ.  It did the trick for the year that I pumped, but barely.  By the end a piece would kind of work its way out and it would make this really bad sound.  The woman I bought it from used it with her 2 kids, so the thing did make it through 3 children.  It was time for a new one.

So I did a little research and found one of the best ones out there, made by Ameda.  I added it to the registry and decided to wait until a good coupon deal came along to make the large investment.  Luckily, my amazing mom and dad offered to buy it for me!  They are so good to me :)  So my mom bought it with a $50 rebate I found and it arrives a few weeks ago!  I really wanted to open it, but the tape that has it sealed says that it is non-returnable if opened and while I'm sure everything with pumping and breastfeeding will go well, you just never know.

So it's sitting in the back closet, also anxiously awaiting the arrival of LBZ.  BBZ was very excited about the box when it showed up, and even more excited when I told him that it is a milk machine to get milk out of mommy's body for his baby brother!  It's fun talking about nursing with BBZ because he totally remembers how all of it works.  It was just 6 months ago that he weaned, after all.

So 2 more things were crossed off of our list in the last 2 days!  First I found this... 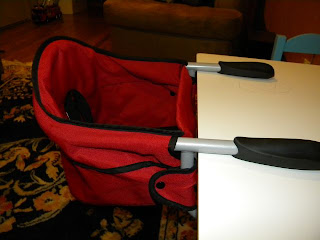 For only $15!  I thought it was $60 at the baby superstore, but it is actually only $38.  But still, that's a great deal for something that seriously looks brand new!  Our friends were going to let us borrow theirs, but I'd hate for something to happen to theirs.  Plus, a whole other child in any kind of baby equipment could really ruin it.  I'm so glad I found this and picked it up yesterday!

Next I found this... 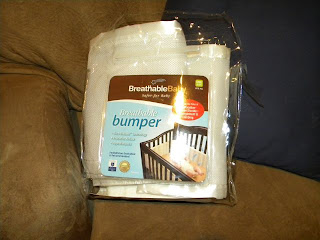 For only $8!!  I looked at the registry at how much this was and it is $30 brand new.  This one was barely used and looks spotless!  I had a red one with BBZ that I could have reused, but I do like the idea of the breathable kind, just in case :)

So those are my great finds so far.  I have just a few other things I am keeping my eyes open for, but most things are all set.  Now we just need you, LBZ!

Here's a picture I snagged of BBZ today playing with his Legos. 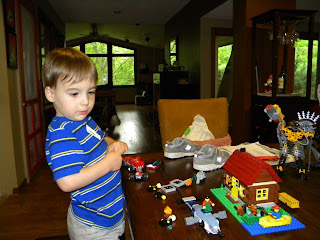 Gosh, I sure do love this little man!

And yes, those are shoes on the kitchen table.  Don't judge.
Posted by Anna at 10:05 PM