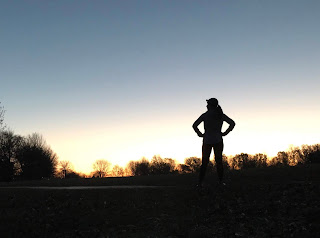 I think it is safe to say that 2018 was one hell of a year. I have learned so much about myself this year, and about life, really. The biggest lesson is that there is always meaning to be found, particularly in the negative events in our lives.

Before I get too much into that, I want to talk about the word I chose for 2018: STRETCH. Each year I choose a word that is the focus for my year. This year I wanted to stretch myself both literally as in stretching to keep my muscles loose and healthy, and also figuratively as I intended to stretch myself beyond what I thought I was capable of. 2018 stretched me in more ways than I ever could have imagined. I ran not ONE but TWO ultra marathons, saw my chiropractor on a regular basis, volunteered for a bunch of races, threw down a ton of trail miles, and even got a story published on Ultra Running (dot) com! I also faced the biggest health issue of my life so far when I was diagnosed with cervical cancer.

Through it all though, a theme emerged. As I stretched myself beyond what I thought I was physically capable of, I also faced some of the biggest challenges of my life and quickly realized that I must also stretch what I believe to be true in the world. I hold a strong truth that the universe is a friendly place that is on my side. There were more times this year than ever that I had to stretch this belief far to find the meaning behind what life threw at me.

The year began a bit uneasy when N was essentially laid off from his job. It wasn't sudden, and we had plenty of time to plan for the potential of him being out of work, which was all for nought as he quickly leaned into the change and decided to go into business for himself as an independent consultant. This was the first of many experiences that showed up to challenge us and to test our perpetually optimistic attitudes towards life, which includes the strong belief we both hold: that the universe is friendly and wants us to succeed.

It was much later in the year that I realized how necessary it is to look not only at the perceived negative event, but also to the positive that came of that negative, which likely would have never happened without that first crappy thing. Case in point: while N's new job required a lot of travel every other week, when he was in town he set his own schedule, making it feasible for us to cancel post-care for our boys and provided for extra time with N when they got home from the bus. Plus the time alone gave me complete control over the TV a few nights every other week, which was actually pretty nice. I also had to deal with the raccoon situation, which ultimately helped me feel like I could handle a lot more going on at the house than I realized.

Fast forward to mid-year when we lost our beautiful dog, Delilah. She was 13 years old and lived a long and happy life. I am so grateful to have spent almost her entire life with her. What a sweet girl she was. I miss her terribly.

The loss of Delilah was devastating. I could barely walk into the house without breaking down in tears. She was our girl and I wasn't sure how to go through the day-to-day life without her. Around the same time that she died we were hoping to remodel our kitchen. We moved forward with the remodel after she died, and there were workmen in and out of our home for 8 weeks, which never could have happened when she was alive. While we loved her dearly, she was an aggressive dog and we could not allow her to be around other people. We would have had to kennel her to get this work done, and that would have been very difficult for her.

It was also in her loss that I realized how much it means to me to have animals in our home. In August we welcomed our new kitty, who became a light in the darkness of our animal-less home. N might beg to differ, but even with torn up pieces of paper and kitty footprints on the counter and early am wake-ups and the overall annoyances of a young cat, we are smitten with him. He is teaching the boys what it is like to have a friendly cat and has brought a light to our home that even I didn't realize had burned out. If not for the loss of Delilah we would not know our sweet new kitty.

And of course the biggest issue we faced this year, and truly the biggest challenge I have faced in my life so far, my cancer diagnosis.

I am still searching for the meaning in this. In the previously mentioned examples, the meaning became clear sometime after each experience. I am still waiting for the meaning of my cancer to be revealed. I feel a strong sense that life cannot just go on like cancer never happened, or that it can go back to the way it was. There has to be some deeper meaning for what I went through. I have no doubt that this meaning will reveal itself at the right time. It might be subtle, or it could hit me like a ton of bricks. I'll wait patiently knowing that the universe is friendly, and trust that there is something to come of this.

I am so looking forward to what the new year will bring. More stretching? More adventure? More opportunities to be vulnerable? When I think about power and strength and all that goes into the way I make decisions in my life, I realize how much fear I have as I approach the world. I have spent a lot of my life afraid of what might happen. What am I so afraid of? Failure? Success? Feeling too vulnerable? Things not going perfectly? Any of these and more, I suppose.

I have learned two very important things this year. First, the universe really is a friendly place, even when it doesn't seem so. So what is there to be so afraid of? Second, I do not want to spent my life allowing fear to keep me from doing not only what is possible but also what might just bring me the most joy in this life.

My first word choice for 2019 was fearless, but this really is inaccurate. To operate without fear is inhumane. We are wired to be afraid in order to stay safe. While I would like to face the world with a sense of fearlessness, I do not think this is exactly what I am going for.

As I explored words that would capture what I hope for myself in 2019, one kept coming to mind...

TRUST
noun
1. firm belief in the reliability, truth, ability, or strength of someone or something

If all of this is true, what do I have to be afraid of?


"I truly believe that everything that we do and everyone that we meet is put in our path for a purpose. There are no accidents; we're all teachers - if we're willing to pay attention to the lessons we learn, trust our positive instincts and not be afraid to take risks or wait for some miracle to come knocking  at our door." ~Marla Gibbs