I was sitting with BBZ at the kitchen table recently while he was doing his homework.  I picked up a grown up coloring book hoping to find some peace and meditation in coloring.  After he finished his homework, he began coloring with me.  He noticed that I was coloring all of the leaves on the flowers on the paper green, and encouraged me to think creatively and not feel the pressure to make the picture the way it looks in the real world.

I dismissed this initially, then I decided to challenge myself and do just what he suggested.  It's amazing what can be accomplished internally by simply looking at something with a creative eye vs. what one would expect to see.

Going a step further, BBZ continued to encourage me to access my creativity and gave me a blank piece of paper.  He instructed me to write "Anna's World" on the top, and to draw pictures on the paper of things that I find in my world.

Deep.  Seriously deep.  This exercise proved to be much harder than it should have been.

How does one first define their world, and then draw it on a 8"x 11" sheet of paper?  As I struggled to begin with an obvious awkwardness, BBZ continued to encourage me to simply draw my world.

So I did.  And this is the result: 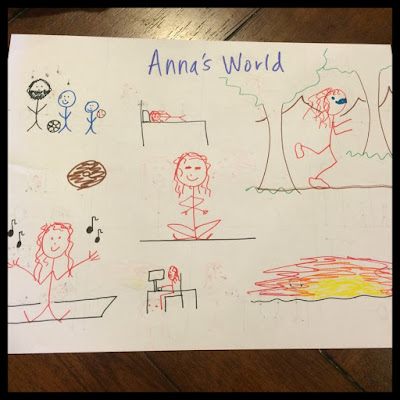 I think what I love most about this exercise, is that BBZ knew what each of these things was.  I don't mean that as a testament to my drawing, but rather that he really knows me well enough to know the things that would be in my world.  So from left to right you'll see: N and the 2 boys, sleeping/snuggling in bed, running in the woods, donuts, yoga, dancing on a blanket outside, working and the sunrise/sunset.

I was pretty proud of my little world!  Feeling proud, I figured my work was done, but oh no.  Not even close!

BBZ has been very into writing comics lately.  He loves to read them, and lately he has been writing comic strips, which typically involve superheros and supercows (he's really into cows right now.  It's a little odd and totally adorable!)

So he tells me my next task is to draw a comic strip based on my world.  Geez,  This was really going to be hard!  I was so incredibly impressed by BBZ's ability to create a complete story on a blank sheet of paper.  I don't know that I am necessarily NOT creative, but this exercise definitely helped me see how VERY creative BBZ is.  And it inspired me to tap into this piece of myself now and then.

So this is what transpired from my "Anna's World" drawing into my comic strip story line: 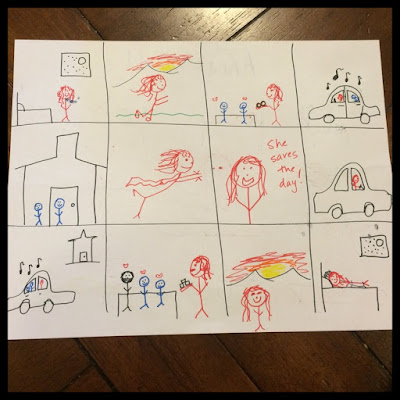 From left to right: Wake up early, while the moon and stars are still out.  Run and watch the sunrise (BBZ asked where I run around here in the mountains and I reminded him that this is a pretend story).  Feed my smiling boys donuts.  Drive them in the car and listen to music.  Drop them off at school.  Put on my super woman cape and "Save the Day"!  (BBZ also reminded me that I don't have a cape.  I asked him how he can be so sure :) )  Get back in my car, pick up the boys from school, listen to music, feed my family a delicious dinner, watch the sunset and go to sleep next to my husband.