Besides my freshman year in college, I have always lived with a cat, until about 2 years ago when we lost our cat, Bill. Bill was not an easy cat to love. He bit the boys, hated everyone but me, had an inflammatory bowel disease that required a lot of cleaning up after and was simply very hard to care for. I said when he died that I never wanted another cat, and for a long time I believed that.

It was BBZ who first started asking for a cat. There is a book series called Warrior Cats that he and his friends love. He began asking while Delilah was still alive, and due to her health concerns I was worried that introducing a new animal to the house would not be in her best interest. Add in our kitchen remodel and there seemed to be one thing after another that kept us from bringing a cat into our home.

With the kitchen remodel done (material for a future post!) and a vacation in our sights, we put in an application for a 4-month old kitten but by Friday had not yet heard back from that shelter. We went to a different shelter without a commitment to bring anyone home, but we found the most beautiful and cuddly cat ever, who quickly became Mr. Winter Z. 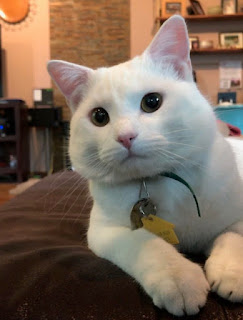 He is a 2-year-old domestic short-hair with stark while fur and beautiful yellow eyes. We are all smitten with him! I think about him during the day and wonder what he’s up to, and snuggle with him at night, particularly after the boys are asleep. We brought him home that same day, and by that evening he was sitting on our laps and playing with toys. He is the perfect addition to our family, and we are so happy to have him! 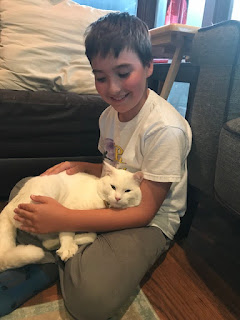 It’s incredible to see the way the boys want to care for him. He can do no wrong! I am so glad that I did not let my bad experience with Bill keep me from welcoming another cat into our home. Winter’s story is that he lived with a family with three kids before they moved into an apartment that didn’t allow him to be there. We could tell that he came from a family, and I am so glad we are able to give that to him again. He is a pretty lucky cat, and we feel incredibly lucky to have found him! (funny side note is that his shelter name was lucky, but the boys really wanted to give him his own name.) Last night he discovered pouncing on LBZ’s feet under his comforter. So much cuteness!! 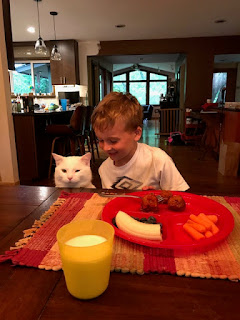 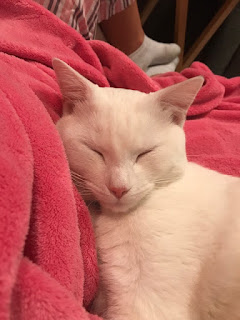 And as Game of Thrones fans, we’re super excited that we get to say “Winter is coming” every time he comes into the room!
Posted by Anna at 10:21 AM