Feelings. So Many Feelings. 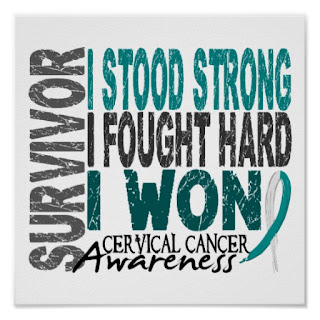 First and foremost, I am so happy to share that my doctor confirmed today that I am officially cancer free! All of the pathology came back clear, so I am at no more risk than anyone else for cancer in the future. Hooray!!

I have so many feelings today as I process this news and all that has happened in the last few months. It is officially over, it seems. Yet I feel that I have more processing to do. While the surgery was the end of a fairly long story, it also feels like it all happened very quickly.

I read the pathology today, which was more detailed than the other reports I have read. The report described my uterus and fallopian tubes in detail. It described the colors and even the measurements. As I read this description, I became very, very sad. I imagined the doctor who was looking at the specimen as just that, a specimen. I understand science and that my uterus looks the same as anyone else’s. That the cancer growing on it was the same as anyone else who has had cervical cancer. Yet it came from my body and served such a huge purpose.

I wondered if the pathologist thought about me as the person whose body once housed that incredible organ. I wondered if she had an appreciation how magical that organ was, or if it was just another part of her day as a scientist. I wondered if she would appreciate the fact that it twice grew from the size she saw into huge as a tiny embryo stretched it to house a beautiful 8+ pound baby boy.

What I read was the science behind it all, and it sort if hit me that my uterus really isn’t there anymore.

Ultimately, I am glad it is gone. It was to serve no purpose going forward. It was the source and cause of a lot of stress and worry over the past 5 years. So much worry that I can now put behind me, but interestingly enough, I am not quite ready to do that just yet. I suppose it makes sense though. I mean, I have been very aware of its existence since August 13, 1991. Does anyone else remember the day of their very first period? I don’t even know how I know that, but I totally do.

I have more healing to do both physically and spiritually and am looking forward to four more weeks of rest and recovery. I am still on orders of taking it easy and no running and will hopefully be able to try some light impact exercise soon. I am missing the way exercise helps me cope with the stresses of life. Although there isn’t much stress in doing word puzzles and binge-watching Netflix 😊

So for now I will spend some time in introspection and reflection, in hopes of getting to a place where I can genuinely say that all of this really is behind me.